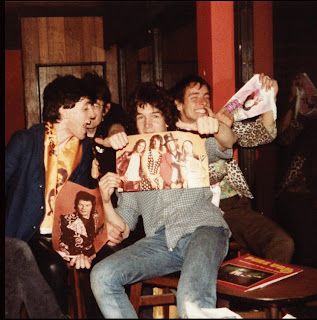 For those music fans inclined to the making of lists, naming and ranking favorites is one of the great useless pastimes, half fandom and half polemics masquerading as aesthetics. For those making lists about punk rock, it's polemics squared, if only because among the confrontational genres, punk is contrarian by nature—there cannot logically be a best punk band ever, as that achievement would probably not be considered “punk” by some angered malcontent. So I will not make a list of my favorite punk bands for the moment. Instead, I will discuss my favorite late 70s British cult band: the Swell Maps. They are not the best, certainly, or the most influential, or even the most obscure, or the punk-est, but their dim caterwauling and sloppy racket are, to me, the quintessence of inspired do-it-yourself before that slogan was even a slogan. A loose band of anywhere from three to six members, they wrote songs and made sounds and put them to tape at home, starting in the early 70s, not because they wanted hits or fame, but because they liked messing around and making noise. In fact, terming them ‘punk’ is probably a mistake; they were neither political nor even ideological, unless trying to write Can and Faust and T. Rex songs at home using limited technology and even more limited chops constitutes an ideology.

As a functioning, record-releasing band, they only lasted a few years, 1977-1980 to be more precise, and while they barely played any live shows, they were able to gain some press due to exposure by the British titan of independent music-making, John Peel, who allowed them to record three sessions for his radio show. They released four singles and two full-length LPs, first on their own Rather Records label and later on Rough Trade. After breaking up on an Italian tour in early 1980, principals Nikki Sudden, his brother Epic Soundtracks, and Jowe Head all went on to toil in the furrows of indie rock, usually with modest success at best; sadly, both Sudden and Soundtracks (né Adrian Nicholas Godfrey and Kevin Paul Godfrey) have since passed away.

For a band that released rather little during its floruit, the subsequent treatment of the Swell Maps catalogue shows signs of overcompilationism and botched-reissue-ism. At present their discography is confusing and distressing. I will discuss their official catalogue in a later posting; for now, I would like to right an egregious wrong and submit, for your listening pleasure and education, the three Peel Sessions which the Swell Maps recorded for John Peel. There are many classic Peel Sessions which have been released and admired by collectors of punk and post-punk noisemongery: at the top of the list are the mammoth and wonderful 6-CD sets by the Fall and the Wedding Present, but the briefer collections by the Gang of Four and the Only Ones are actually terrific introductions to those bands, as well as proof that they could play live-in-the-studio with precision and fire; the Only Ones have admitted that their Peel Sessions surpass their official releases.

The fact that the Maps’ three Peel Sessions have never been formally reissued is a shame, especially since together they make up forty-four splendid minutes. With buzzing shards of punk, eerie and ominous drones, and a slight obsession with World War II imagery, this is amateur music at its best. Any aficionado of the era probably already knows their albums and singles, but hearing these songs alive in the studio is a delight, especially since punk bands are often less well documented. There are also some surprises, with Lora Logic (of Essential Logic, X-Ray Spex, and the Raincoats) adding wild fun saxophone to Session #2, and two otherwise unreleased tracks (the PiL-ish “Bandits One Five” and the moody “Bleep And Booster Come Round For Tea”). If you’re a fan of Wire, the Fall, the Homosexuals, or the Pop Group, you will find something to enjoy here.

The Swell Maps: The Peel Sessions

NOTE: Tracks 5-9 were released on the 1981 double-LP rarities collection Whatever Happens Next…, which has never been issued on CD. Sound quality on these is far from ideal, but generally quite listenable. If you have better copies of any of these sessions, please let me know.